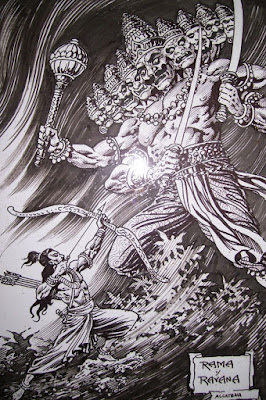 
Lord Ram then ordered, "Matali, drive quickly to where Ravan is staying, but at the same time be very cautious."

Then, remembering that He was speaking to Indra's charioteer, Lord Ram felt embarrassed and so He apologized, "I am very sorry to have instructed you as if I were your master. It is just that I am eager to kill Ravan, so please excuse My offense."

Matali was very touched by Lord Ram's wonderful display of humility. As he maneuvered Indra's chariot close by Ravan's side, Lord Ram and his adversary began to exchange arrows. Soon, the fighting became very intense. Clouds rained blood upon Ravan's chariot, and a flock of vultures followed him from behind. A huge meteor fell nearby and so all the Rakshasas (the monster clan) became exceedingly despondent, while Ravan became convinced that he would soon die.

On the other hand, very pleasing signs appeared before Lord Ram, and so He became convinced that victory would soon be His. In the duel that followed, Lord Ram and Ravan gradually exhibited the entire wealth of their respective prowess. The competition became so intense that both armies became stunned with amazement. Indeed, all the soldiers stood motionless, just like paintings, and because they were so absorbed in watching the fight, they did not even think of attacking one another.

When Ravan tried to knock down Indra's flag, Lord Ram deflected his arrows with His own. Then, because He was determined to match Ravan, blow for blow, Lord Ram knocked down the Rakshasa King's flag. Ravan then pierced Indra's horses, but when the celestial steeds did not even stagger, he became angry and frustrated.

At last, Ravan resorted to the Rakshasa power of illusion to send forth mace-clubs, huge shuriken-discs, trees, and mountain peaks. Lord Ramchandra was able to counteract all these before they reached His chariot, and so they fell upon the army of monkeys. Lord Ram and Ravan continued to dispatch thousands of weapons at each other, and as they collided in the air, they fell down onto the battlefield. In this way, the fighting continued for about an hour. Lord Ram matched Ravan, blow for blow, while all created beings looked on, their minds astonished with wonder.

Both drivers also displayed great skill. But, when the chariots came side by side, Lord Ram forced Ravan's four horses to turn away by piercing them with four arrows. This incited Ravan's anger, and so he repeatedly pierced Lord Ram in retaliation. Lord Ram remained undisturbed, and thereafter, the exchange of all varieties of weapons became so feverish, that the fighting that took place was unparalleled in the history of warfare.

Sometimes Ravan fought in his ten-headed feature, and at other times he fought in his normal form, having one head. On one occasion, Lord Ram managed to sever Ravan's head with an arrow. But, as that head fell to the ground, a duplicate one miraculously cropped up in its place. Lord Ram then severed that head, but once again, another one immediately manifested itself as a replacement. Again and again Lord Ram cut off Ravan's head, until, altogether one hundred such heads lay on the battlefield.

Because each time a new head appeared to replace the old one, Lord Ram began to wonder, "With these arrows I formerly killed Maricha, Khara and Viradha. I pierced seven Sal trees and killed the invincible Vali. These arrows had humbled great mountains and agitated the fathomless sea. How is it that they are now ineffectual against Ravan?"

The duel continued at a furious pace. Both combatants were obsessed with the desire for killing the other. In fact, several days and nights passed without any break in the fighting.

At last, when Matali saw that Lord Ram was not gaining His desired victory, he inquired, "Why are you simply fighting defensively? My Lord, are You not aware of Your limitless potencies? The hour of doom has now arrived for the King of the Rakshasas. Why don't You employ the divine brahmastra?" Being thus reminded of this ultimate weapon, Lord Ram picked up the arrow that Agastya Rishi had formerly given Him at the time of their meeting in the Dandaka forest. That arrow had been constructed personally by Lord Brahma for Indra's use, and later on it was presented to Agastya. Garuda supplied the feathers of that wonderful arrow and the sharp head combined the energy of the Firegod, Agni, and the Sungod. Mount Meru and Mount Mandara contributed their gravity to the arrow's weight, and its shaft was made from the subtle ethereal element.

This brahmastra weapon was omnipotent and infallible, and its dazzling effulgence made it rival the splendor of the sun. After empowering the brahmastra with the required mantras, Lord Ram placed it upon His bowstring. As the monkeys gazed upon that flaming arrow, their hearts became filled with delight, while a dreadful fear penetrated the cores of the hearts of all the Rakshasas.

As Lord Ram pulled the bowstring back to His ear, the earth trembled and the heavens also appeared to become disturbed. When Lord Ram released the brahmastra, it sped through the air like death itself, and then violently fell upon the chest of the wicked Ravan. After piercing right through the King of the Rakshasa's heart, that effulgent arrow entered deep into the earth, taking his sinful life along with it. As that awesome brahmastra came and re-entered Lord Ram's quiver, Ravan dropped the bow from his hand and fell down dead from his chariot.

With great, transcendental ecstasy, the monkey warriors loudly proclaimed Lord Ram's victory as they attacked the fleeing Rakshasa army. From the sky, the demigods shouted, "Sadhu! Sadhu!" ("Well done! Excellent!"), as they completely covered Lord Ram's chariot with showers of flowers, and beat upon their celestial drums.

Now that Ravan was dead at last, the demigods and great rishis felt blessed relief and a peace of mind that they had not enjoyed for a long time. A cool and gentle, fragrant breeze began to blow, and the sun spread its rays very serenely, so that happiness seemed to pervade all directions. Sugriv, Angad, Vibhishan and Lakshman were the first to come and pay their homage unto Lord Ram. But, when Vibhishan saw his elder brother lying dead upon the ground, he broke down and cried in an outburst of intense grief. Meanwhile, news of Ravan's death spread throughout the inner apartments of the royal palace. Ravan's wives came out of the city and entered the battlefield, their hair disheveled and dress and ornaments in disarray. Overcome by unbearable grief and wailing aloud, some of the women rolled in the dust like madwomen, while others went and embraced different parts of Ravan's dead body.

Crying out, "O my lord! O my husband!" one of the ladies hung around Ravan's neck, while others clutched at his feet, rubbed his wounded chest, threw up their arms in despair or fainted away, being unable to bear the grief. Amidst the sounds of loud wailing, these lamentations were heard: "Oh, dear husband, by ignoring our good advice, as well as that given by Vibhishan, you have brought about your destruction. Now that you are dead, our lives are also finished, for the wife has no other support than her husband. This is the inevitable end for such a cruel and hardhearted person like you. Who else would have dared to kidnap Sita and keep her by force, against her will?"

Ravan's favorite queen, Mandodari, lamented, "My dear husband, even though you were so powerful, you could not stand before Lord Ram. You were too proud because of your acquired prowess, and so you became a great burden for the earth. You foolishly could not understand that it was Lord Vishnu Himself who had descended upon the earth as Lord Ram, in order to relieve her of that burden."

"O Ravan, your sinful passion for Sita has turned out to be the cause for the destruction of all the Rakshasas. You always masqueraded as a great hero, but you were actually proven to be a coward when you deceitfully kidnapped Sita. Still, despite your abominable character, I do not see how I shall be able to go on living in your absence." Finally, Mandodari fainted with her head upon Ravan's chest. Her co-wives then lifted her up and revived her. At this time, Lord Ram ordered Vibhishan, "You should begin the funeral rites for your elder brother without further delay. Only after the cremation of Ravan's body will it be possible to comfort his widows."

Vibhishan replied, "I do not want to perform the funeral ceremonies for a man who kidnapped the wives of others, who was merciless and tyrannical, and who was inclined toward irreligion. Of course, Ravan was my elder brother, and so it is my duty to respect him. But, on the other hand, because his actions were like those of an enemy, I feel that he does not deserve my worship."

Lord Ram said, "Vibhishan, I approve of your words because they uphold the cause of virtue. Still, I would like you to cremate your brother's body. After all, despite his faults, Ravan was a great hero. And, it is a fact, that with the death of his body, all hostilities have now ended." Vibhishan went inside the city to make arrangements for Ravan's funeral. After bringing his maternal grandfather, Malyavan, Vibhishan placed Ravan's body on the funeral carrier and then proceeded, along with other Rakshasas who carried the firewood. Going toward the south, the party arrived at a consecrated place where they cremated Ravan's body according to the Vedic injunctions. Thereafter, Ravan's wives were consoled, and then everyone returned to Lanka. 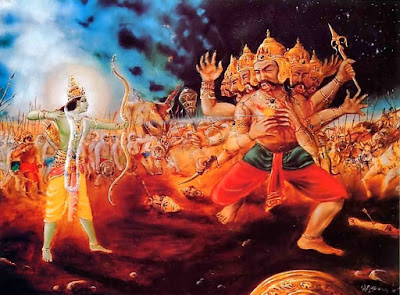